Excursions in the History of the Lower Oder Valley During the last ice age, glaciers expanded from the north into the south of Brandenburg. Meltwater, dead ice and wind formed the Uckermark landscape. The Pomeranian moraine (about 12,000 years ago) left behind hills, lakes, streams and the Oder lowlands. These were filled with melting and river water sediments up to about 50 metres to today’s level. The ranges of hills on both sides of the lower Oder valley are ground moraines. Their material was deposited during the standstill phases of the glacial retreat. Typical animals of the ice age such as the mammoth, woolly rhinoceros and giant deer died out towards the end of the ice age.

The Oder flowed through the valley, changed its course again and again and poured over its banks during the floods. Hunters and collectors settled down. They experienced the valley as a wild moor landscape with lowland forests and numerous bodies of water. Fishing in the river meadow and hunting in the surrounding forests determined life. Among the prey were i.e. elk, red deer, wild boar and venison. The early inhabitants of the river landscape cohabitated with bear, wolves, European bison and aurochs. There were no permanent settlements yet. The people set up encampments, which they visited again and again. Flint tools, milling stones and an axe made out of deer antler, which was found in a polder near Schwedt/Oder, are proof of this.

Farmers and livestock breeders migrated along the Oder into the area. They cleared the forest to create space for their settlements and farmlands. In addition to the cultivation of crops, they were engaged in hunting, fishing and cattle farming. Their pets included sheep, goats, pigs and cows. The plough and axe were the most important tools. The people needed a great deal of wood for construction and raw material to build the settlements. Also as fuel for heating, preparation of food and ceramic production, wood was especially important during this time. 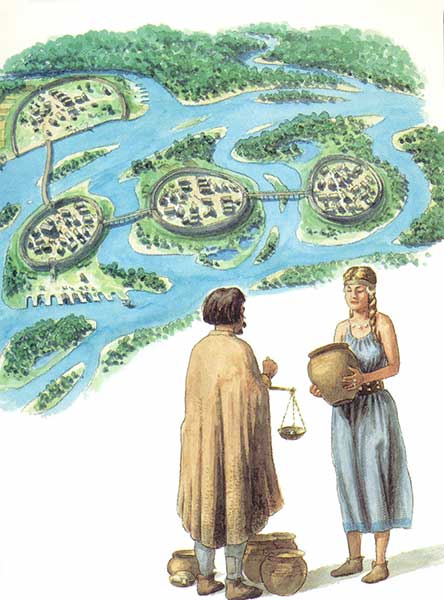 In the 7th century, West Slavic tribes moved from the east into the area. The Slavs lived on grain cultivation and cattle farming. Hunting, fishing and beekeeping also played an important role. The Slavs’ need for wood was enormous. They required it for building houses, protective walls, bridges and boardwalks. At strategically favourable locations, they erected fortress ramparts like the Burgwall Schwedt at an Oder crossing. It was the cultural and commercial centre of the region. The two-tier rampart system in Stolpe also dates back to this time. 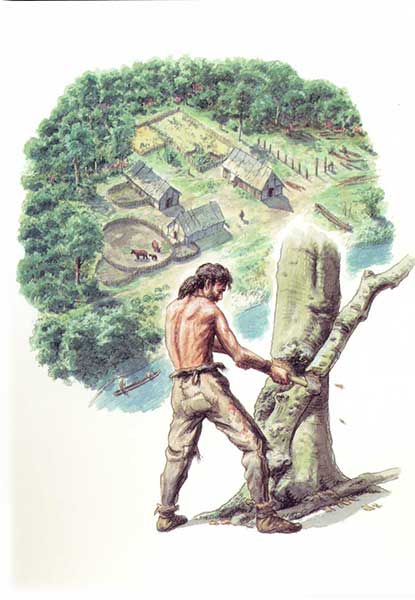 The lower Oder valley in the Middle Ages

In the 12th and 13th centuries, German peasants, citizens and nobles moved into the country on the initiative of Slavic princes, the dukes of the Houses of Pomerania. Regardless of their nationality, “German rights” were granted to the settlers. Thus, they had personal liberty and inheritance rights to land and property. Agriculture and settlements were now strictly organized. The population grew strongly. The use of the plough and three-field crop rotation boosted the agricultural yields. At the same time, fishing developed into one of the most important industries in the Oder valley. Fortresses were built for defence. The tower castle in Stolpe, which was built during this period, is the oldest brick building in the region. In addition to the bricks made from the local clay, fieldstones left over from the ice age were also used. 18th Century: The Age of Tobacco

In the 18th century, Huguenots introduced the tobacco plant into the country, thereby creating a new and important branch of the economy. The plants thrived well here and the region quickly developed into a centre of tobacco cultivation, processing and trade. The barns, in which tobacco leaves were dried, are preserved in various designs up to this day. They were built of wood, fieldstones and brick. Depending on material, design and size, they are differentiated as simple field sheds, massive barns and multi-level storage facilities. Common to all are numerous hatches and openings, which allow a good drying of the tobacco. 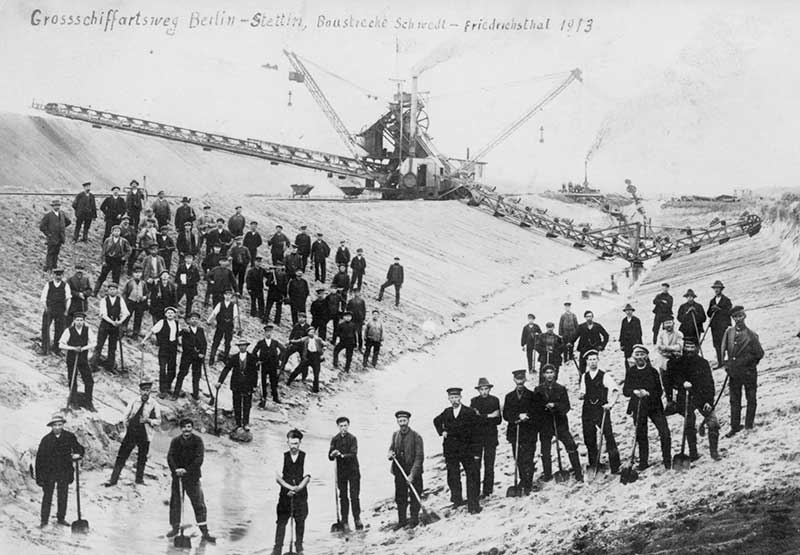 19th Century, Beginning of the 20th Century: The Oder in the Age of Industrialisation

Trade flourished and required an extensive transport network. The new cobblestone streets were lined with chestnut and linden trees. These avenues still enrich the landscape today. With the growing population, the demand for food increased. Farming businesses experienced an upswing. Agricultural production now took place on large areas. Valley slopes, which to this day have hardly been used, were drained and the wetland forests cleared. Dikes and stream relocations changed the course of the Oder. The 1904 law approved in the Prussian Landtag for the “improvement of the run-off capability in the lower Oder” created the basis for the construction of the polder system. Following the Dutch model, 129 hydro-technical installations, 4 ship locks, 21 boat locks, 30 dike openings as well as 28 bridges and 177 km of Oder backwaters were constructed. Ships up to 600 tons could now sail the Oder and the parallel, flood-free “Hohensaaten-Friedrichsthaler Waterway”, which was built incorporating the Oder backwaters. Many of the hydro-technical installations were destroyed during WWII. While these were being repaired on the German side, nature was able to reclaim the landscape in the Polish part of the lower Oder valley.

1960: Intensification and Industrialisation of Agriculture

Even in the 20th century, agriculture remained the most important economic activity in the region. Land reform after WWII was followed by socialist collectivisation. In the 1970s, the industrialisation and intensification of land use began. With the help of large-scale monocultures, complex machine applications, chemical fertilisation and the use of plant protection products, enormous increases in yields were achieved. The remaining large moors, such as the Randow-Welse and Gartzer Bruch, were drained in order to use them intensively as grasslands. Schwedt/Oder, almost completely destroyed in the Second World War, became an important centre of the petrochemical industry and paper production. Within 20 years, the population rose from 9,000 (1960) to 54,000 (1980). In Gryfino on the east bank of the Oder, the Polish neighbours built a new, large coal-fired power plant.

With the political changes in 1990, a new era began for the lower Oder valley. Despite Oder regulations, intensive agriculture and influences of industry, a floodplain landscape, which has become rare in Central Europe, could be preserved in the widespread, regularly flooded lowlands of the Oder. This has been protected, preserved, maintained and developed as a national park since 1995. The focus is on the undisturbed cycle of natural processes. Visitors to the national park can relax in a unique landscape and take a lot of new impressions home with them. New hiking trails as well as several kilometres of bicycle paths on the dikes and in the meadows offer the tourists a special experience in nature. A new branch of the economy, nature tourism, has been developing for more than 20 years.